HL2 Narrative: Go To Jail, Do Not Pass Go 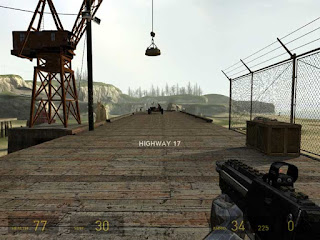 After our time in Ravenholm, we are brought out into the real world once again, and it's time once again to be introduced to some plot elements. Primarily, the Highway 17 segment is about the fight between the Resistance and the Combine forces. Here we start to see the real resistance movement for the first time, with resistance bases littered with weaponry all across the countryside. We also see the general disrepair of the roads in this whole sequence. Apparently, human transportation technology is not a concern of the Combine, and they would rather everyone rely on their flying machines.

At one of these stations we get a report saying that Eli Vance has been captured with Dr Mossman, and they have both been found at Nova Prospekt, a high security prison.

At the end of this segment, we run into a lighthouse base that falls under attack from all directions, showing pretty clearly how intense the Combine search for Freeman is becoming. Luckily, you sneak out along a cliff path and make your way steadily closer to Nova Prospekt.
- Sand Traps -

The first thing we see in this section is a dying man lying on the sands with a friend on the rocks nearby. This is how we are introduced to the primary mechanic of this part of the game, which is avoiding the sandy ground and instead relying on physics to place safe platforms to traverse. Largely this is a mechanics segment, playing with the physics and eventually with the pheropod. While these mechanics aren't directly narrative in nature, they do kind of point out that the Combine is still subject to the natural whims of the planet they have invaded, and can be destroyed by those processes. 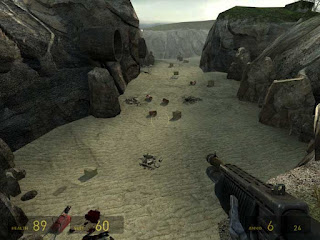 Once we make our way to a small resistance base, (who's sole purpose seems to be harvesting pheropods?) we meet with a Vortigaunt who tells us that "The Eli Vance has confidence in you!" implying that they are somehow in communication with him. Which, as we see later in this series of games, might be entirely possible.

Also of note here is the combine's radio transmission that refers to Freeman as "Subject Zero", further dehumanizing him.

Next up is our infiltration of Nova Prospekt!

Posted by BaldSavant at 12:57 PM No comments:

We have passed the point where the narrative elements are all in play. We no longer need any setup to understand what is going on and how we should feel about it, so the game gets more into the interesting gameplay mechanics instead. That said, you can't just stop giving out story info, we're just going to be talking about larger chunks of gameplay at a time from here on.

At the end of Route Kanal, we got introduced to our new ride: 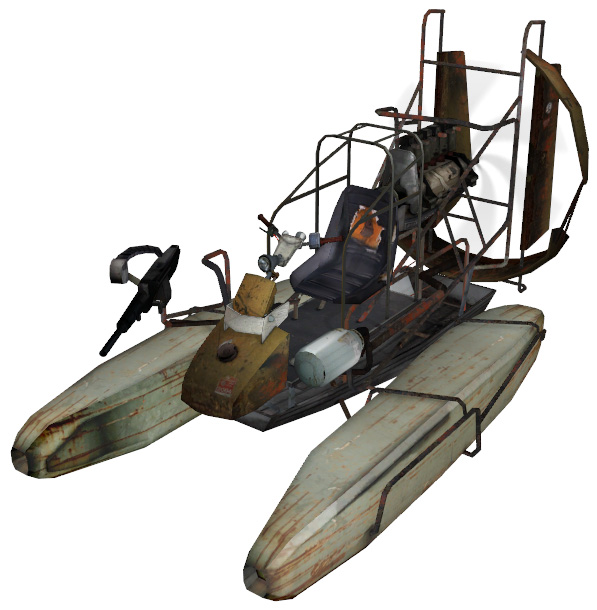 We get on the boat and start on down the river. Early on we find a red barn that turns out to be Station 12, which was being announced over the earlier radio broadcasts as officially offline. When we first see the building, we see G Man standing just outside, watching us. As we approach, he wanders off, but not before making us REALLY CURIOUS.  Unfortunately, upon investigating the area, all we really find are the remains of a resistance base, and the head crab mortar shells that took them out.

One interesting sight we see in this area is a broken propaganda sign off in the distance. For the first time we are seeing the larger effectiveness of the Resistance movement, and we are reminded that the Combine are fighting a serious battle with the denizens of earth. 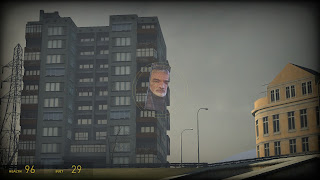 Another noteworthy spot is a Combine outpost housing a ton of soldiers, and another looping broadcast from Breen. This time, he's directly calling out Gordon Freeman, saying he is a criminal and imbuing him with mythical powers and referring to him as The One Free Man is nonsense and we must all strive to overcome such low-brow thinking. He talks down to anyone thinking such things as lesser beings, trying to appeal to peoples' desire to be better than they are.

Aside from those little tidbits, this segment is largely just setting up the helicopter boss fight. We DO get another glimpse at G Man, and another resistance camp that talks about needing to evacuate due to the increased Combine activity. Just enough to keep us aware of what's happening in the world.

Upon arriving at Black Mesa East, we get another dose of character information, much like when we were at Kleiner's lab. Here we first see Dr Mossman who talks about how nice it must have been to see Kleiner and Vance when they were at the top of their field, subtly implying that they are old and irrelevant in her eyes. She keeps talking, and mentions the new teleportation technology they are developing, and mentions that even the Combine do not have this technology, and that it would change the war completely.

As she's talking, we are given a few little bits of visual information in our environment, mostly that the Vortigaunts are helping out in all manner of ways now. We see a man playing chess with one, another is cooking dinner for the base, and a third is repairing broken equipment, clearly showing that Vortigaunts are a major part of the resistance fight against the Combine, and are happy to blend in to daily life.

We get a bit of a history lesson here as well. 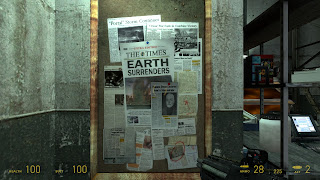 This cork board tells us the entire history of how this happened. Apparently, 7 hours after the resonance cascade brought the Combine into our world, Dr Breen negotiated a complete surrender in exchange for a position of power. Eli corroborates what the board tells us, as well, and now we know how we got to where we are. All thanks to probably a single texture map and two lines of dialogue. Efficient!

Alyx Vance walks in and immediately begins fighting with Mossman. The two butt heads and Eli suggests you and Alyx wander outside and get Gordon familiar with the Gravity Gun. We meet DOG out here and have a grand time playing with physics toys, until our good time is ruined by a Combine raid, and we're forced down the tunnels into Ravenholm

- We DO Go To Ravenholm, Apparently -

Ravenholm is a narrative dead zone (pun intended). Literally nothing of significance happens here. We meet Father Grigori, but he doesn't play a role later on in the game, he's simply an interesting bit of set dressing to keep us entertained. No, Ravenholm serves no purpose to the story, but is instead a place to get you used to the Gravity Gun's combat. Apparently Valve considered the weapon important enough to devote an entire chapter of the gameplay purely to allowing the player to come to terms with it. The whole section is filled to the brim with physics toys, interactive traps, and every other shiny mechanic that Valve wanted to show off.

And once Valve is done showing us all the cool things its engine can do, we are returned to the world above and dropped onto Highway 17.

Posted by BaldSavant at 12:30 PM No comments: