This write up is taking far longer than it should due to my schedule, so let's just knock out all of the rest of it in this final entry:

We enter the prison facility of Nova Prospekt, a stronghold of Combine control. This place is a bastion of their influence, and every room seems to be filled with Combine weaponry. What I find most interesting about this, however, is the presence of the lambda caches, even here. It tells me that even in the very heart of Combine control (ok, maybe the lung, we aren't in the Citadel just yet), the resistance still very much has a presence. Even here, the Combine are not all-powerful. 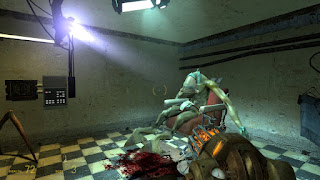 The Combine. taking out their frustrations

We also get to see a nice behind-the-scenes view of Dr Breen while we're in Nova Prospekt. The same propaganda we've seen throughout the game play on the radios throughout the facility, but this time with a tilt towards the Combine soldiers themselves. Breen is still justifying his actions and those of the Combine, but this time to a group of soldiers who have already pledged their allegiance. Clearly Breen does not believe in their loyalty enough to sustain them through all the atrocities they are committing in his name, so he pushes them even in their off time at the base. We get an interesting view of the hierarchy of control here as well, when Breen starts to talk about the Benefactors being disappointed in the progress shown by the Combine forces, and how Breen talks about them taking out their frustrations on him.

Breen tells the troops that Freeman is not some highly trained assassin, but merely a scientist. Not only that, but he was in stasis for years (Which is knowledge that Breen should not have, by the way). These statements subtly reinforce the idea that Freeman is being gifted with extraordinary powers by whatever faction has kept him in stasis for so long, the mysterious forces of which G Man is a part. Breen continues by saying that the "trans-human forces" must earn their membership into the Combine, and that the alternative to this is extinction. A fate which he is determined to fight against.

I also like a moment where you get a proclamation that mission failure will result in permanent offworld assignment. Because apparently the "trans-human forces" are such a fragile construct that threats are the only way to keep them moving forward!

As you progress through the prison, you once again run into Alyx Vance, and the main plot starts up again. You find Eli Vance, finally, and are rewarded by a bit of character development while he speaks with you and his daughter. Not much in the way of plot, however, as this time focuses primarily on the relationship of the characters. And in that same vein, you run into Dr Mossman here as well, who you find out has been working with the Combine to exchange Eli's life for Freeman's. She tries to get on your good side and make you understand her actions, but almost immediately betrays you by teleporting away with Eli before you and Alyx can figure out that she has changed the destination coordinates.

Alyx and Freeman finally get into the teleporter as well, only to reappear a week later. Barney is now leading a rescue operation for the Resistance forces, and you join him to assault the Citadel at last. 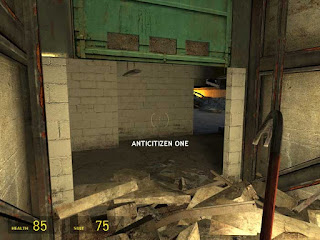 At this point in the game, you are introduced to a new mechanic. You now have the ability to command squadmates. This mechanic is used as a pseudo-narrative element to make the player understand that no one can assault the Citadel alone, even if they ARE controlled by magical aliens. We return, in this segment, to a less personal story. No more personal character development, instead we see the Resistance and their fight as a whole. Breen's broadcast screens are ripped from the walls they are mounted on, while those broadcasts futilely urge citizens to become collaborators for the sake of humanity's evolution. We see the Combine pulling out all the stops, unleashing hordes of Tripods to quell the rebellion. They've even resorted to using headcrab shelling, which we saw earlier in the game in isolated areas, inside the city limits. Given the unpredictable, and uncontrollable, nature of the headcrab zombies, you have to assume that Breen must be truly desperate to unleash that inside his own city.

This segment is mostly battle-oriented, but we get some few moments of development. The Combine Citadel is setup inside a former museum, for reasons that are not addressed. Breen takes a moment to publicly condemn Freeman for the fall of humanity and the distrust of the Combine. As if Breen's inability to enact his terrible agenda is somehow Freeman's fault, despite the entire resistance that exists outside of Freeman himself. And to go along with the upgraded troop movement in Anticitizen One, we see here that even the camera drones flying through the city have been upgraded. EVERY bit of tech the Combine can find is being thrown into this final battle.

Fighting our way into the Citadel gives us an on-rails moment of calm to digest everything that's been happening right before the finale. We see the inner working of the Combine base, including some vehicles and things that seem to be mobilizing now, but which we have never seen out in the wild. We also see the twisted abominations that seem to work for the Combine clerical department, filing paperwork and maintaining the various base's engineering needs. It speaks to the depravity of the Combine that even for basic grunt work they feel they must create hideous beasts out of what surely must once have been human beings. 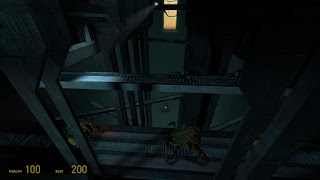 Once the rails section has ended, we are dropped into a weapon magnet of sorts. The device seems to destroy anything that could be deemed dangerous. Unfortunately for the Combine, the Zero Point Energy Manipulator seems to interact poorly with this tech, and our beloved gravity gun comes out of the process radiating blue energy and deadly power. To compliment this overpowered gameplay, we are also treated to overpowered health chargers on the walls. This, however, has a few implications beyond simply the immediate benefit of the game offering you more health. Clearly, the Combine are keeping their power limited even for their field agents. They have the ability to hand out much more efficient first aid stations, but they keep this to themselves inside their tower. Presumably because they don't trust their own forces to keep the technology contained.

Breen begins addressing Freeman directly at this point, welcoming you to the Citadel, saying you have no place here, and blaming Kleiner and Vance for their actions during the 7 hour war. Breen even questions your motivations here, asking "you have destroyed so much, can you name even one thing that you have created?".

The final segment of the game starts with another rail ride up into Breen's office. He steals the gravity gun from you and discounts it as a worthless toy. All your friends appear here to offer character development. My personal favorite, among this, is the summary of herself that Mossman offers when she instructs you "don't struggle, it's no use. Until you're where he wants you, there's nothing you can do". This speaks VOLUMES about the type of person she is, and her motivations throughout this entire experience.

Breen here mentions a fascinating bit of information. Freeman's contract with G Man is apparently open to the highest bidder. Presumably this explains the segment in Episode 1 where the Vortigaunts appear to defend Freeman against G Man. They cannot allow him to fall into Combine control after all the good he's done for the resistance.

The section wraps up with Mossman betraying Breen and earning back a bit of good faith from Alyx and Freeman, who leave Mossman to take care of Eli while they go to stop Breen. Breen is shown on a view screen with one of the Combine brain bug.... things.... accepting an offer of a host body in order to survive on an alien world somewhere. Breen runs off to escape into a teleporter of some kind, and Freeman gives chase. We catch up just in time to be present for a cataclysmic explosion, only to be saved by G Man. 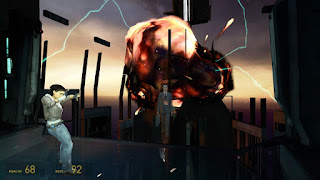 G Man ominously tells Freeman that he has received a service request that Freeman will not be given a choice in taking. Presumably this is the Combine offer mentioned by Breen moments before, but the screen fades to black without any final confirmation.

And thus ends Half Life 2.

Thanks for reading!
Posted by BaldSavant at 11:14 AM