Today I would like to discuss the introduction sequence in D Pad Studio’s Owl Boy. Obviously this will involve some spoilers for the first few minutes of the game (and I wrap the article up with a set of spoilers for the rest of the game, but I'll warn you again before we come to that part)

I believe a lot can be learned from the way a game introduces its story, characters, and core mechanics. I also find Owl Boy to be an interesting summary of a few of my favorite techniques, so I’d like to discuss the ways in which it succeeds, and the ways it does not. So strap in, and let’s get rolling! 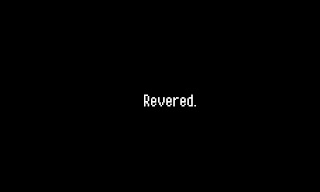 The game starts with a black screen, and white text. The first bit of information the game decides to give us is this word. “Revered”. This establishes quite a lot about the tone of the game. Revered is a descriptive word that is infrequently used to refer to oneself. That tells us this game is about someone other than our main character, someone that perhaps we are going to be interacting with, and perhaps about our perception of that person, because the word revered also implies things about that perception. We get a couple more words and then “This is what we owls aspire to be”, which tells us who we are in this game, and how the world perceives us. This also settles the idea that this game is about living up to outside perceptions. The screen changes and we are shown Otus, our avatar, for the first time. At the same time, the text on screen changes tone and refers to us directly, rather than speaking abstractly about the whole race. Another person on screen refers to us as their student, and explains that it will be our duty to live up to the public perception of owls. The takeaway from this segment is that our mentor is actually enthusiastic about his teaching, and confident that young Otus will grow to be a rousing success, a belief that will be challenged in the very next sequence. The screen fades and we are jumped briefly forward in time to see ourselves in another lesson, on another day, but this time our teacher’s attitude has changed. He says that we have been struggling so far, but that today he wants to try something new. A physical challenge, rather than a mental one, and one he hopes Otus will excel in.

The game moves into a tutorial sequence where we are introduced to the movement mechanic, flight. In this tutorial, we are told to fly to the platform above us. As we are given control for the first time, an icon appears above our heads telling us what button we must now press. Upon pressing the button, more dialogue rips control away from us to explain that our goal is the only other island visible on the screen. The game does not trust its players to understand its controls, or its goals, but despite the ham-fisted design of this tutorial area, we are treated to an interesting narrative moment when it is revealed, through gameplay, that Otus actually can’t fly as high as the goal platform. We are tasked with moving upward, but fail to complete the task, and are reprimanded.

Once we have failed in flying, we are treated to another sequence, one where we are being tutorialized in throwing objects. A platform appears, and we are asked to place the object down upon it. What’s interesting about this segment is that we are asked to place the object, but the gameplay is only tutorializing the throw mechanic. We aren’t given the usual option to place an object, in favor of forcing us to throw that object, breaking it. This implies that Otus, up to this point in his life, was not overly concerned with carefulness, and teaches us a bit more about our player character. After this event, during the normal gameplay, we always have the ability to place things down. Apparently, Otus learns this lesson quite well!

The screen fades again, and this time we come back to a slightly darkened world around us. Our teacher now speaks to us with a crueler tone, having given up all hope that we will ever be useful. We walk (not fly, which itself acts as yet another introduction of a mechanic) away from our mentor and the world turns black as evil eyes begin to stare at us. As we walk, the ground around us falls away and we are haunted by the literal spectres of our self-loathing. They take the form of townspeople, but with shadowy, evil features who stay with us for the duration of this sequence, even as we progress forward. This entire sequence is fairly uninteresting from a game design perspective, you simply move from one side of the screen to the other with no attempt at introducing any further mechanics into the mix, focusing instead on conveying a narrative moment.

Trembling with self-hatred!
At the end of this, the screen goes black once again, until it is revealed that we have been sleeping. Turns out this was all just a dream! But dreams are about learning, so what have we? We are an owl. The owls are a proud race that the world reveres. We have not been doing a good job of living up to that reputation, and have become a nuisance to those around us. We are insecure about our place in the world, and insecure about our own abilities. Basically, this appears to be setting up a typical coming-of-age story where our young hero goes off on an adventure to prove himself! But is that where it goes? Let’s use what we’ve learned from the introduction as a lens to examine the rest of the game much more loosely. 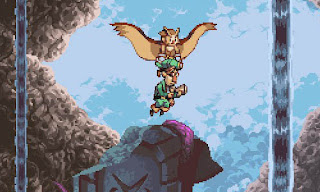 Let's go exploring!
Fair warning, this will involve some major spoilers for the Owl Boy story. The story begins as the town is invaded by pirates. You try, and fail, to protect the town and are then moved towards another city in need of defense. This city falls and you must journey to the home of the ancient owls to find a way to protect your civilization as a whole from the attack of these pirates. You find out that the other owls succumbed to their hubris and brought this situation down upon themselves. You find that the pirates are a plague that the owls created, and which came back to haunt them. The qualities that you aspired towards have turned out to be a facade that has rotted in time, leaving the reality of the Owls’ arrogance exposed to the world. Meanwhile your own lacking self-esteem has led you to try to become what you had idealized. You became what you wanted to believe all other owls already were, and in doing so surpassed those whom you had held up as role models. In the beginning of the game, we are asked to walk through town and be given judgement from our peers, the spectral wraiths of hatred itself. At the end of the game, the townsfolk come to us to express their thanks. The game sets up the story as if it were a coming-of-age story of a young person entering adult life, being given new responsibilities, and struggling to live up to those. That’s more or less exactly the story we are given, as Otus comes to lead a scrappy band on an adventure to save the world as he knows it (and eventually does so quite literally). In conclusion, OwlBoy succeeds in setting up a tone in an efficient manner with its introductory sequence. While the gameplay tutorialization remains a little ham-fisted, the story fills in the gaps by offering the player unique narrative moments during those tutorials. From forcing the player to fail in their assigned tasks, to creating a pseudo-cutscene around the player as they progress through a dream. Overall, the introduction of OwlBoy is a solid use of narrative design techniques that I felt was worthy of a closer look. Hopefully you’ve found some value in this examination, I know I have. Thanks for reading!
Posted by BaldSavant at 5:36 PM